Mapping BP’s influence from the British Museum to Russia 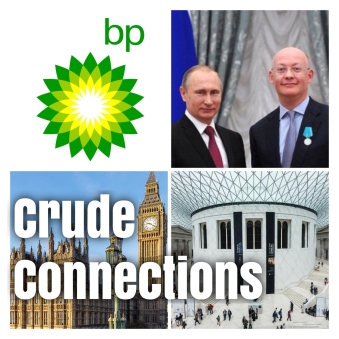 Russia is pivotal to BP’s success. It accounts for a third of the oil giant’s production and a quarter of its profits. In order to keep its business in Russia on track in the face of sanctions, spills and swirling controversy it has developed an elaborate strategy. But from cosy relationships with politicians to VIP exhibition launches, the full extent of BP’s toxic agenda can be hard to grasp.

Crude Connections is a new online resource that reveals how BP’s business strategy extends from the British Museum’s latest blockbuster exhibition, Scythians: Warriors of Ancient Siberia, through meetings with ministers in Westminster, all the way to Putin’s right-hand man.

Click here to view our ‘Crude Connections’ map which reveals the relationships between the politicians, meetings and cultural institutions featured in our research.

In each section, you can get the full story on:

Sponsorship: branding culture from the UK to Russia

Scythians: climate change and Indigenous rights in the Altai mountains