This page reveals how BP uses cultural sponsorship – in the UK and Russia – to keep its business on track. For other pages in Crude Connections, click below:

Branding culture from the UK to Russia

‘When there is an option, naturally we are going to try to match a particular exhibition with somewhere we have an interest…’

From the British Museum to the National Portrait Gallery in the UK, and from the Mariinsky Orchestra to the State Hermitage Museum in Russia, BP uses sponsorship deals as a cheap tool for boosting its brand. This page brings together some of the most blatant examples of how by sponsoring iconic museums, galleries and theatres in both countries, BP has deflected controversy and kept its business in Russia on track.

At the opening of the British Museum’s Scythians: Warriors of Ancient Siberia exhibition in September,
BP’s sponsorship didn’t go unnoticed by the Russian Ambassador…

And by sponsoring the Science Museum’s Cosmonauts: Birth of a Space Age exhibition, BP’s brand got recognised by those at the top. The museum’s director Ian Blatchford was awarded the Pushkin Medal by Vladimir Putin for his role in hosting the exhibition, where one onlooker remarked…

‘I can’t remember the last time anyone from the UK was awarded one of these things.’

By mapping out BP’s sponsorship deals in the UK and Russia, the company’s strategy becomes clear. Scroll down to get the full story…

Sponsorship of the arts, sport, science and education is an integral part of BP’s business strategy, a way to boost its brand, maintain its ‘social license to operate’ and curry favour with significant policy makers and politicians. 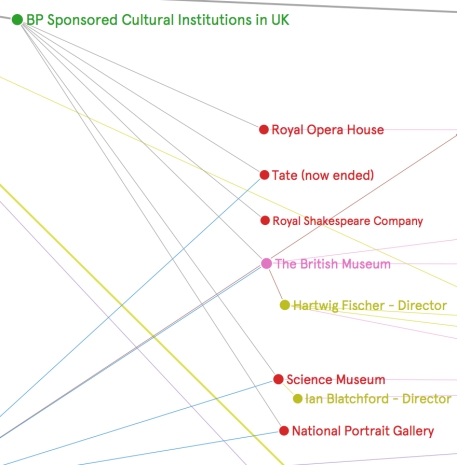 In Russia and the UK, sponsorship of largely state-run arts and cultural organisations dominates the company’s Corporate Social Responsibility programme. By targeting these national institutions, BP is able to frame itself as a philanthropist while binding the company to state-funded cultural activities. 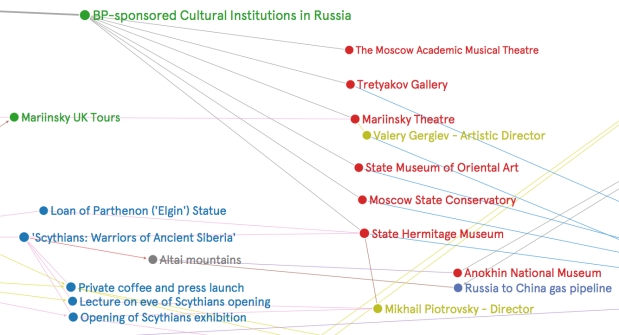 By mapping out the cultural institutions sponsored by BP in the UK and Russia, this cynical strategy becomes evident. But what also emerges is a picture of BP carefully taking advantage of instances of “cultural diplomacy” between Russian and British cultural institutions, ensuring that channels of communication are open and that BP is regarded favourably by both governments. Should significant political decisions arise – such as the imposition of sanctions – BP benefits from being seen as not just another company but one that is deeply embedded in significant international relationships.

Recent examples of these valuable linkages (with more details further down) include:

International collaboration between museums and galleries of course has many benefits. But when we look at the wider political context, BP’s sponsorship of UK and Russian cultural collaboration starts to look disturbingly parasitical on relationships that otherwise have the potential to further our collective knowledge and understanding.

The company’s sponsorship deals sit within a complex web of meetings with government ministers, behind-the-scenes lobbying and close collaboration with the Russian state-owned oil company, Rosneft: another company with a dubious reputation and a legacy of toxic oil spills. By owning a 19.75% stake in the company and sitting on its board of directors, Rosneft’s reputation becomes BP’s also. And by allowing BP to sponsor the Scythians exhibition, that reputation in turn tarnishes the British Museum.

The British Museum’s BP Exhibition, ‘Scythians: Warriors of Ancient Siberia’, was formally opened on 12th September 2017 and opened to the public two days later. The Russian Ambassador’s remarks at the opening, and the praise he lavishes on BP, clearly reflects how BP strengthens its influence by embedding itself in the cultural links between the UK and Russia and between two world-renowned state museums.

The Ambassador for the Russian Federation remarked at the opening of the exhibition:

This exhibition is a true jewel for the Russia-UK Year of Science and Education. I’m hugely grateful to the Hermitage and other museums from Kazakhstan and UK that contributed to it, the British Museum that brought it to life with great storytelling, and, of course, the BP that has such a remarkable record of supporting cultural and scientific ties between our two nations.”

BP is a sponsor of both the Royal Opera House in London and the Mariinsky Theatre and Orchestra in St. Petersburg. Strategically, the company has associated itself with two of the most renowned and elite classical music institutions within each country.

More specifically, BP has signed a deal to sponsor the Mariinsky tours to the UK for a 7-year period, with performances at venues such as Cadogan Hall and, of course, the Royal Opera House. BP takes full advantage of the opportunity to entertain government ministers, with a special invitation issued to the Secretary of State for Culture, Media and Sport for a performance where the Russian Ambassador was in attendance. Tellingly, it is often senior staff at BP Russia issuing such invitations rather than their colleagues in the UK.

‘This isn’t only about sponsorship; this is bigger than that. We share the same approach to the changing world around us.’

In 2016, the “actor-vist” theatre group ‘BP or not BP?’ held an unsanctioned protest performance just before a BP-sponsored performance of Prokofiev’s ‘Romeo and Juliet’ by the Mariinsky Orchestra began at Cadogan Hall. Their performance, entitled ‘Ramira and Juliet’, was a same-sex interpretation of Shakespeare’s iconic tale, highlighting both BP’s ties to Rosneft and Russia’s anti-LGBTQ legislation and institutionalised repression.

From 18th September 2015 to 13th March 2016, the Science Museum hosted ‘Cosmonauts – Birth of the Space Age’. The exhibition, sponsored by BP, was described by the museum as ‘the greatest exhibition of Soviet spacecraft and artefacts ever to be seen outside Russia’.

Emails acquired by Art Not Oil under the Freedom of Information Act showed that the exhibition had been a prime promotional opportunity for BP Russia – one email even appeared to show BP attempting to influence the opening date of the exhibition. More details can be found on p.32 of Art Not Oil’s report, ‘BP’s Cultural Sponsorship: A Corrupting Influence’.

Curiously, the Cosmonauts exhibition was also funded Len Blavatnik’s ‘Blavatnik Family Foundation’. Blavatnik, a Russian billionaire and businessman, helped form and then sat on the board of a joint venture with BP: TNK-BP. Blavatnik and his colleagues later came into conflict with BP when this joint venture was sold off to Rosneft as part of a larger deal which gave BP its 19.75% stake in the company.

In an email acquired by Art Not Oil under the Freedom of Information Act, the Science Museum wrote to BP and informed them that:

‘We’re also anticipating the Russian PR launch [for the exhibition] will take place on 9th June at the Queen’s birthday party in the Russian Embassy in Moscow.”

This clearly demonstrated that the exhibition – and its associated launch events – offered BP valuable opportunities to promote its brand and influence those at the highest levels both in the UK and in Russia. Like the linkages between Mariinsky and the Royal Opera House, or the British Museum and the State Hermitage Museum, BP’s cultural sponsorship aims at lubricating the necessary diplomatic ties between the UK and Russia in order to further its strategic business interests.

More details can be found on p.32 of Art Not Oil’s report, ‘BP’s Cultural Sponsorship: A Corrupting Influence’.

On 10th December 2015, Director of the Science Museum Ian Blatchford was awarded the Pushkin Medal from Russian President Vladimir Putin ‘to recognise his role, and that of the Science Museum, in creating the acclaimed ‘Cosmonuats: Birth of the Space Age’ exhibition’. With recognition of the exhibition at the highest level, BP will have acquired valuable legitimacy in the eyes of the Russian government.

At the awards ceremony, one onlooker told the Moscow Correspondent for Sky News, ‘I can’t remember the last time anyone from the UK was awarded one of these things.’ The Correspondent rounded off his write-up of the event by noting, ‘We understand that Cosmonauts: Birth of the Space Age has provided him [Vladimir Putin] and David Cameron with something positive to talk about at otherwise awkward discussions about Ukraine and ISIS.’