Read a summary of the internal emails released under FOI and a timeline here.
Our background to the SMG’s relationships with oil companies can be found here.

This morning, writer and environmentalist George Monbiot revealed on Twitter that he has chosen to pull out of a series of ‘Climate Talks’ hosted by the Science Museum Group (SMG) over its ongoing partnerships with two major oil companies, BP and Equinor. It comes as new emails disclosed to Culture Unstained under the Freedom of Information Act show the Director of the SMG actively helped BP to counter internal concerns about its sponsorship deals by organising promotional talks for staff and trustees.

The Science Museum’s ‘Climate Talks’ have been billed as ‘a series of panel discussions, Q&As and events exploring the problems caused by climate change’ in the run up to the UK’s hosting of the COP26 Climate Summit in November, with the museum having hosted the official launch of the summit a year ago. Featuring speakers such as Dr Jane Goodall, Brian Eno, Tim Peake, Dr Hannah Fry and Kira Marie Peter-Hansen MEP, the latest panel discussion takes place tonight and is hosted by journalist Jon Snow. Monbiot had been set to appear at a panel on ‘Global Greenhouse Gas Removal’ on the 31st March, chaired by broadcaster and author Robin Ince. 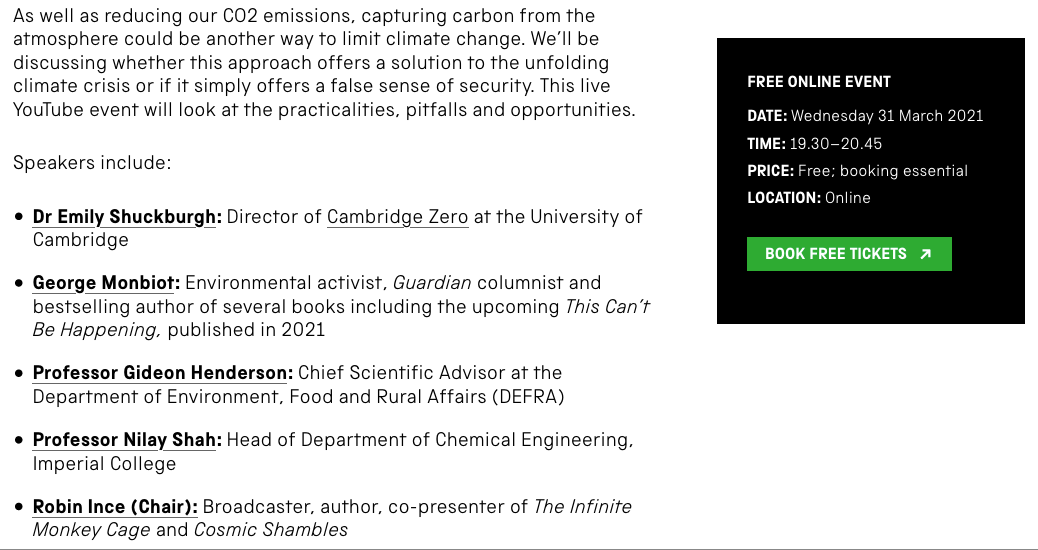 Emails released under FOI have also been made public today by the campaigns and research organisation Culture Unstained which reveal how the Director of the Science Museum Group Ian Blatchford discussed the mounting opposition to BP’s sponsorship deals and helped to develop a response to unease amongst SMG staff. Blatchford arranged the ‘informal chat’ the same day that he sent a lengthy email to his 1,300 staff to make an unapologetic defense of his approach to fossil fuel sponsorship. Emails show that BP had also raised concerns about opposition to its sponsorship deals with civil servants at the Department for Business, Energy and Industrial Strategy (BEIS) the same day.

Two dedicated Q&A sessions with BP were then set up for staff both at the Science Museum in London and the Science and Media Museum in Bradford. Museum trustees were ‘strongly encouraged’ to attend the sessions, billed as an opportunity to hear why BP ‘sponsors cultural organisations’ and ‘what they are doing now and in the future in terms of their contribution towards meeting the Paris Agreement’. BP’s claim that its business plan is in line with the targets set in the Paris Climate Agreement is widely disputed.

“It’s hugely problematic for a science museum to host talks on ‘the problems caused by climate change’, while it gives much needed legitimacy to those that caused them. Despite their warm words about becoming ‘net zero’ in the future, right now BP and Equinor are disregarding the science and continuing to invest huge amounts in fossil fuels. Museums are facing very real financial challenges from the pandemic. However, it is also the case that we must act now if we are to avoid the worst impacts of climate change. Refusing to promote the polluters would be a significant step.“

Pressure intensified on the SMG in 2018 when 46 highly-respected scientists, science policy experts, naturalists and community representatives called on the museum group to end its partnerships with BP, Equinor and Shell, joining forces to support a formal complaint to the museum. Among them were naturalist Chris Packham, former NASA climate scientist Professor James Hansen, and expert in science disinformation and author of Merchants of Doubt, Professor Naomi Oreskes. The SMG brushed off the criticism.

A team of staff from BP was directly involved in developing the museum’s Energy Gallery, and in 2015 the museum faced major controversy when emails released under the Freedom of Information Act showed how Shell had attempted to influence the museum’s climate science gallery, Atmosphere. In 2016, the Science Museum opened ‘Wonderlab: The Equinor Gallery’, a permanent interactive exhibition for children sponsored by the Norwegian oil firm, and BP currently sponsors the museum’s STEM Training Academy.

Many museums and cultural organisations have cut their ties to oil companies because of their role in fuelling the climate emergency. In the last two years, the Royal Shakespeare Company and National Galleries Scotland cut their ties to BP and oil firm Shell’s long-running relationships with the National Theatre, Southbank Centre and British Film Institute have all now been ended. In September, the art activist group Fossil Free Culture NL celebrated having successfully made Amsterdam’s Museumplein “fossil free” after bringing about the end of Shell’s partnerships with the Van Gogh Museum and the Royal Concertgebouw. Meanwhile, the British Museum continues to face large-scale protests and calls to end its controversial sponsorship deal with oil giant BP.