Following the recent resignation of Ahdaf Soueif from the British Museum’s Board of Trustees, workers at the Museum have issued a statement of solidarity with Ms Soueif last night.

Members of the PCS union Culture Group condemned the “troubling nature of the relationship between BP and the arts” and stated that:

“through its sponsorship of our most prestigious cultural institutions, BP is allowed to propagate the myth that, without its existence, we would not have access to the collections of our publicly funded museums and galleries.” 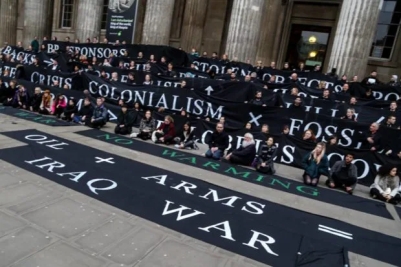 The British Museum saw the biggest protest in its 260-year history last February when BP or not BP? protested against the museum’s decision to allow BP to sponsor an exhibition of Iraqi artefacts (pictured above).

The PCS union Culture Group represents 4,000 museums & heritage workers across England, Scotland and Wales, including at the British Museum, Tate and National Gallery. It has a track record of condemning oil sponsorship and is a member of the Art Not Oil Coalition. Its annual conference saw workers voting to declare a Climate Emergency back in May with a motion submitted by workers at National Museums Liverpool. The national PCS union followed shortly after.

The British Museum workers’ statement also specified that “access to culture is a human right, not a privilege bestowed by large corporations” and that “the collection is being used to greenwash the activities of a company whose actions threaten lives the world over, both now and in the future”

The statement also referred to the issue of repatriation of artefacts raised by Ms Soueif and said:

“As a union with a membership whose personal histories are intertwined all across the globe, it is important for our workplace to represent all of us, in the same way that the collection should represent world cultures”.

Workers at the British Museum also thanked Ms Soueif for drawing attention to the precarity faced by outsourced workers and the treatment of individuals formerly employed by Carillion which PCS union Culture Group represents.

“The acceptance of BP sponsorship by the British Museum should be a concern for all and I applaud Ahdaf Soueif in making a stand. Public arts institutions should not depend on blood money to bring arts and artefacts to the public, nor should they be holding on to and displaying items pillaged or stolen. The legacies of colonialism, enslavement and illegal wars, combined with current threats because of climate change and racism, impact on those from the global south every day. Our UK arts institutions should be inclusive places for all, not triggers for trauma and pain.”

British Museum chair Sir Richard Lambert has been defending BP in detail in interviews on Radio 4 and with The Times. President of the PCS Culture Group Clara Paillard said:

‘Rather than listening to his fellow trustee, Richard Lambert has chosen to side squarely with BP, repeating the spin that its business model is in line with preventing the worst climate change scenarios when in reality it plans to spend 97% of its investments on fossil fuels. He also claims BP doesn’t extract highly polluting tar sands oil when it does, and that BP pays its taxes, when in fact last year the company paid no tax in the UK and instead received a handout from taxpayers of £134 million despite profits of £5.6 billion. This publicly funded museum should be standing up for their visitors, staff and the public good, but instead it’s siding with a multinational oil company that only provides around 1% of its income.’

Last night, workers at the Tate, also members of the PCS union Culture Group, met to discuss the Climate Emergency declaration Tate announced yesterday. They also passed a motion declaring a climate emergency but went further than their bosses by calling for a carbon cap and register of fossil fuel interests of Trustees and Donors. They called for Tate to be more ambitious than 10% carbon decrease over 5 years and discussed organising for the forthcoming Climate Strike on 20th September.