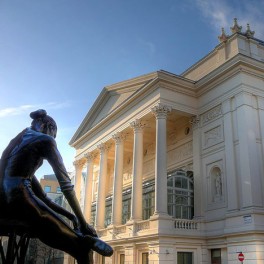 As the Royal Opera House (ROH) prepares to host its first ‘BP Big Screen’ of the year this evening, leading musicians have backed a letter to Mayor of London Sadiq Khan urging him to withdraw permission for BP’s branding of the live opera screenings in Trafalgar Square. The 200 signatories to the letter include leading musicians such as percussionist Dame Evelyn Glennie, tenor Mark Padmore and composer Nigel Osborne, as well as many other respected figures from classical, folk and popular music. It follows the announcement of the ‘BP Portrait Award’ last night at the National Portrait Gallery, an event that was overshadowed by criticism of BP sponsorship made by eight artists with connections to the award, as well as a judge of this year’s prize.

In their letter to Sadiq Khan (full text below), the 200 musicians’ highlight how:

‘The oil and gas company’s sponsorship of the Big Screens is a clear investment in a form of advertising intended to bolster the company’s social legitimacy at a time of climate crisis. It is only with permission granted by your team each year that BP’s brand can be displayed and its merchandise distributed in Trafalgar Square.’

They draw attention to byelaws on the use of Trafalgar Square which establish that permission for any BP branding sits squarely with the Mayor:

‘No person shall within the Square…exhibit any notice, advertisement or any other written or pictorial matter’ unless ‘acting in accordance with permission given in writing by the Mayor’

‘It is entirely reasonable for the Greater London Authority (GLA) to grant use of Trafalgar Square for the public to access opera. It is not reasonable though for the Royal Opera House to then use it to promote a company whose core product the GLA is in the process of divesting from as part of its response to the climate crisis.’

Sadiq Khan recently declared a climate emergency, urged the UK government to do more and last year joined with New York Mayor Bill de Blasio to call on other cities to divest from fossil fuels.

Just some of the 200 signatories to the letter are:

From pop and rock music, Andy McCluskey of Orchestral Manoeuvres In The Dark, The Levellers, Vile Electrodes, artists Ackroyd & Harvey, Fay Milton from Savages, and frontwoman of Mesadorm Blythe Pepino.

‘BP is opposed to everything musicians stand for: they are anti-education, anti-information, and its projects and partnerships actively destroy communities. Funding is a huge challenge for the music industry, which BP has of course fully exploited in order to obfuscate the damaging nature of its activities. The climate emergency is too serious and too urgent for us to let them continue to do this – we have an obligation to disassociate ourselves from an industry that seeks to make profit today at the expense of the future.’

‘I feel to be making a profit at any cost is not responsible. Living as far as we reasonably can by our values and principles by caring for people, our planet and creating sustainable profit is key; this can only be a good investment for our future. We all have an opportunity to act responsibly in a way that sustains business, contributes to the economy and society and the world we all share and value.’

Last month, BP received widespread criticism at its AGM over its billion dollar investments in new oil and gas, a business plan which fails to align with the Paris climate goals. The company was also challenged over its extensive lobbying and continued attempts to obstruct climate legislation.

Chris Garrard, a composer and Co-director of the organisation Culture Unstained, said:

‘This letter sends a clear message to the Greater London Authority and the Royal Opera House that helping a company that is investing billions in new oil and gas to boost its public profile just isn’t acceptable. Both Sadiq Khan and the Chief Executive of the Royal Opera House have made tackling climate change a central part of their agendas but unless it is backed up by bold action that actually takes on the root causes of the climate emergency, their otherwise well-intentioned goals will be undermined.’

Last night, “actor-vist” theatre group BP or not BP? delayed the announcement of the BP Portrait Award after they blocked all three entrances to the National Portrait Gallery in a protest against BP sponsorship. Separately, the Extinction Rebellion group expect hundreds to join them in a creative protest at the first BP Big Screen in Trafalgar Square tonight, a broadcast of the ballet ‘Romeo & Juliet’.

‘Ballet and oil do not mix! It seems almost appropriate that BP should be sponsoring a production of Romeo and Juliet where beautiful youth are poisoned in their prime. Sadly, there is no romance in the current tragedies BP is inflicting on the young people of tomorrow. I am pretty sure that Shakespeare, McMillan, Bizet and Mozart would all be enraged if they knew the legacy of their sponsors.’

‘We’re in the process of a mass extinction, we’re all terrified and we can’t keep burying our heads in the sand and acting like there’s no problem. Allowing BP to advertise in Trafalgar Square by branding the Big Screens makes a mockery of any attempts the Mayor of London and the GLA have made to address the climate and ecological crises. This is a very serious situation and as leaders, it is their duty to take it seriously.’

BP has sponsored the Royal Opera House for 31 years and BP’s Group Regional President for Europe Peter Mather is an Honorary Director. The ROH’s current 5-year sponsorship deal was announced in 2016 alongside deals with the British Museum (sponsoring special exhibitions); the National Portrait Gallery (to continue sponsoring the ’BP Portrait Award’) and the Royal Shakespeare Company (where BP currently sponsors ‘BP £5 tickets’, the scheme for 16-25 year olds). All these institutions are coming under increasing pressure to drop BP, with the British Museum in February facing the biggest protest in its 260-year history, by BP or not BP?, which made the links between BP’s activities in Iraq, climate change, war and colonialism.