Just weeks after Shell was dropped as a sponsor by three major Dutch museums, it has emerged that the oil giant’s long-standing partnership with the National Gallery in London has also come to an end. Over the years, activists have challenged the controversial partnership with musical protests, theatrical interventions and an audacious banner-drop from the Gallery’s iconic portico.

You can view copies of all our sources and research documents on Shell’s relationship with the National Gallery by clicking here.

The news comes as Manchester’s Science and Industry Museum prepares to open a new Shell-sponsored exhibition on Thursday, just a week after the Intergovernmental Panel on Climate Change (IPCC) published a ‘game-changing’ report on the steps the world needs to take to limit global warming to 1.5°C and avoid catastrophic climate change.

The end of the National Gallery’s corporate partnership was confirmed through a Freedom of Information request made by campaigns and research organisation Culture Unstained, and included emails between Shell and the Gallery outlining the decision to end the corporate partnership in January of this year. In one email, the company says it will not be renewing its membership of the Gallery ‘in order to focus on our work to inspire the next generation of engineers through our STEM (science, technology, engineering and maths) education programmes’. The Gallery has confirmed it ‘does not have any current plans to form a new partnership Royal Dutch Shell’. As part of the disclosure, the Gallery released an independent 22-page ‘due diligence’ report on Shell which identified over 100 pieces of negative media coverage on the company categorised into areas such as environment, human rights, corruption and fraud issues. For comparison, the Gallery’s 2012 Ethical Fundraising Policy can be found here.

The National Gallery confirming that they have no current agreement with Shell, nor plans for a future one. The full FOI response can be seen here.

Shell’s retreat from the arts and shift into STEM education is already underway. Since 2016, Shell has been ploughing money into its ‘Make the Future’ PR campaign, incorporating pop music videos and large-scale ‘Make the Future Live’ events designed to boost its brand to millennials and school children.

Shell’s sponsorship of the new Electricity: the spark of life exhibition at the Science and Industry Museum (SIM), which opens on Thursday, has already sparked a major controversy, including an open letter from 70 scientists, artists, politicians and local groups and a petition signed by over 58,000 people calling for the sponsorship to be dropped. The exhibition marks the start of the Manchester Science Festival but several partner organisations have already ended their involvement in the festival in protest at Shell’s presence.

The SIM is part of the Science Museum Group and the exhibition opening comes just three months after 46 scientists, researchers and frontline campaigners – including former NASA climate scientist James Hansen and broadcaster Chris Packham – backed a formal complaint to the Science Museum Group calling for it to end its partnerships with three fossil fuel companies: Shell, BP and Equinor.

‘By ending its partnership with the National Gallery and shifting into science education, Shell is admitting that it was never a genuine philanthropist but a toxic company with an image to clean up. It is deeply concerning though that the National Gallery didn’t end this partnership years ago on ethical grounds, given that it was fully aware of Shell’s record on climate change, its ties to corruption and its human rights violations. Now Shell is cynically trying to spin its minor involvement in renewables, while over 90% of its investments are staying in fossil fuels. Far from ‘Making the Future’, it is breaking the future for the very young people it is targeting with its sponsorship of science.’

‘The PCS Culture Group is delighted to hear that Shell’s corporate partnership with the National Gallery has ended. This follows the end of ties between BP and Tate and the end of other oil sponsorships in the art world. As the recent IPCC report has confirmed the urgency of tackling climate change within the next 12 years, fossil fuel companies have got no place in our public museums and should become persona non grata like tobacco companies. We represent 4,000 cultural workers and we want nothing to do with them!’

Over the years, a wide range of artists, campaigners and activists have mounted performances and protests challenging Shell’s partnership at the National Gallery including: 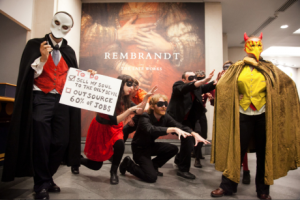 BP or not BP? at the launch of the Gallery’s Shell-sponsored Rembrandt exhibition – photo by Kristian Buus

In 2017, a Freedom of Information request unearthed a series of emails and documents which shone a spotlight on the perks and privileges Shell enjoyed as a corporate partner at the National Gallery, including private tours and events. Shell’s sponsorship of the Gallery’s ‘Rembrandt: The Late Works’ exhibition in 2014-15 brought perhaps the greatest benefits for the oil company; UK media coverage of the exhibition reached 82.9 million people with an equivalent advertising value of £3.2 million. Shell’s sponsorship of the Gallery was shortlisted for a UK Sponsorship Award after the partnership was nominated by the Gallery.

In August, it was announced that Amsterdam’s Van Gogh Museum would end its 18-year sponsorship deal with Shell, following a high-profile campaign of creative protests by the art activist group Fossil Free Culture NL. In the same week, two other major Dutch Museums, the Maurithuis and Museon, also ended their partnerships with Shell. In the UK, Shell’s sponsorship of the Southbank Centre’s ‘Shell Classic International’ concert series came to an end in 2014 following opposition and protests from artists, campaigners and activist choir Shell Out Sounds.

In the last few years, the oil giant’s partnership with the London Symphony Orchestra, which began in 1976 and included tours and other events, appears to have also quietly ended.

Failing to act on ethics and due diligence

In response to the FOI request, the Gallery also disclosed a 22-page due diligence report on Shell produced by Dow Jones Risk & Compliance in January 2016. It itemised 103 pieces of ‘adverse media’ coverage tagged in categories such as environment, human rights, corruption and fraud issues, as well as a more detailed breakdown of areas of concern. It also included a copy of ‘Counting the Cost’, an in-depth report produced by the arts and campaigns organisation Platform detailing Shell’s human rights abuses in the Niger Delta. Despite the clear ethical case against partnering with Shell that emerges through this evidence, the Gallery chose to continue its partnership with the controversial oil company at that time.

‘The due diligence report released by the National Gallery itemises over a hundred pieces of negative media coverage about Shell, including nine pages detailing environmental damage, fines and legal action against the company, and an in-depth report on Shell’s links to human rights violations in the Niger Delta. Had the Gallery taken on board the grave abuses highlighted by the report, and ended the relationship with Shell, that would have sent a powerful message about the importance of ethics and how we value art.

But the Gallery’s policies set the ethical bar so high as to be almost meaningless. It only needs to turn down a donor if it believes it will ‘incur a level of criticism from the press or public’ that seriously damages the Gallery’s reputation. There is no suggestion that it is inherently wrong to be supporting and promoting a company with a long history of human rights violations that is also driving catastrophic climate change. It’s about time more cultural institutions considering corporate partnerships started to act on their own ethical judgment rather than waiting to see if they will get caught.’

The Gallery has come under scrutiny over partnerships with other controversial companies in the past. In 2012, the Gallery ended its sponsorship deal with leading arms company Finmeccanica (now Leonardo) a year earlier than planned, following a series of stunts and protests co-ordinated by Campaign Against Arms Trade to ‘disarm the gallery’. 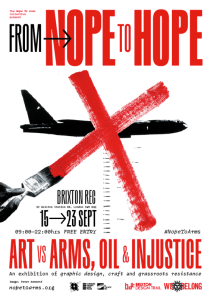 Leonardo is also the company that held a reception for the arms industry, hosted by the Design Museum, last July. This prompted a large number of artists to withdraw their work from the museum’s ‘Hope to Nope’ exhibition on the role design has played in political change. A third of the exhibition’s artworks were removed and the museum had to make it free of charge for the remaining run. This intervention led to the creation of an alternative, artist-curated exhibition – aptly called ‘From Nope to Hope’ – which put the removed artworks back on display, for free, in Brixton last month.